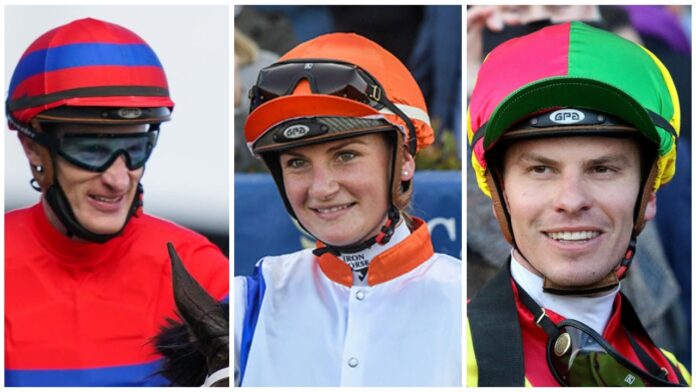 Jamie Kah is one of five jockeys suspended for the entire 2021 Spring Carnival for COVID breaches.

Kah along with Mark Zahra, Ben Melham, Ethan Brown and Celine Gaudray were all suspended until November 25 after they attended a gathering at a Mornington Airbnb on Wednesday night.

The Victorian Government currently doesn't allow gatherings in accommodations such as an Airbnb.

Three-month suspensions for Jamie Kah, Ben Melham, Ethan Brown and Celine Gaudray begin at midnight tonight and will expire at midnight on 25 November. All jockeys were advised of their rights of appeal which must be lodged with the VRT within three days @theagesport

A noise complaint was the undoing of the five jockeys as police slapped the group with $5000 fines each.

Jamie Kah apologised via social media for her actions saying that she knew she had done the wrong thing.

"I want to apologise for my recent behaviour in breaching the government and racing COVID rules," Kah wrote.

"I am deeply embarrassed and disappointed with myself.

"There is no excuse for what I have done and I have let myself down, my family and friends, the racing industry and all Victorians who are doing the right thing in this lockdown.

"I deserve the penalty handed down by the stewards and will take time to reflect on my actions and its impact on so many people."

It is a hammer blow to Racing Victoria who may not be able to host fans for a second straight Spring Carnival. They now lose their biggest mainstream media appeal with Kah rapidly becoming a fan favourite across the country.

She now loses a number of massive Group One rides over the carnival with her ride on Behemoth in the Memsie Stakes now off her hands.

Zahra had been booked to ride 2020 Caulfield Cup winner Verry Elleegant when she made her way down to Victoria again this spring.