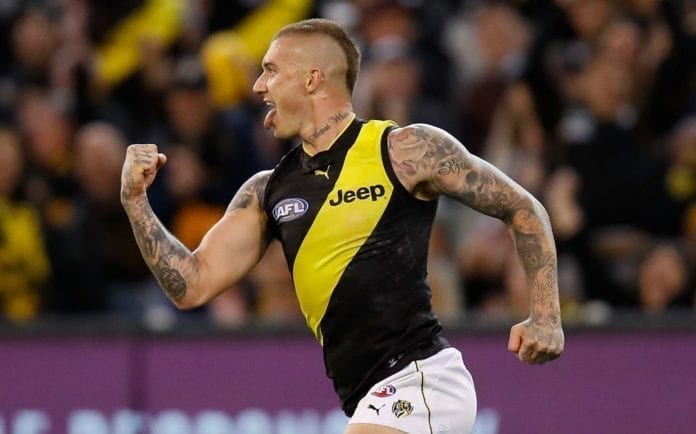 With the fame and money that comes with being a sports star, many venture down to the racetrack to place absurdly big bets on the horses. However, some opt to go a different way and own or part-own a horse themselves.

Becoming a racehorse owner is very expensive and comes with plenty of risks, but a few legendary stars from the sports world have found success on the tracks. While the most famous of these sporting legends hails from the other side of the world, there are two world-class performers in Australia that own racehorses.

So, we’ll start with a sportsman who’s currently at the summit of his sport.

Career-long star for the Richmond Tigers in the AFL, Dustin Martin finished this season as a premiership player once again as well as becoming a Norm Smith Medal winner for the second time in his career. Awarded to the best on the ground, Martin clocked in 22 disposals and kicked four goals to win the award unanimously. With two Norm Smith Medals, Martin has joined an elite group of just four players to win the accolade twice.

Only 28 years old and still on a team that looks set to challenge for a place in the Grand Final this year, Martin will undoubtedly extend his legacy in the AFL. On the side, however, the midfielder also races horses as a part of a syndicate called ‘Dusty’s Boys,’ with the most notable horse being Main Stage.

Playing in all forms of the game, David Warner has become one of the most notorious batsmen in cricket, setting himself in the history books of Australia. In November last year, the opening batsman notched 335 runs not out against Pakistan to land the second-highest individual score from an Aussie. He’s played in the Big Bash, the IPL, the Ashes, and the Cricket World Cup, but his next T20I tournament might be his last.

David Warner has already been selected the spearhead the preparations for the 2020 T20 World Cup alongside Steve Smith, with the duo expected to lead the Aussies to victory. In the cricket betting, Australia are favoured at 11/4 to win as tournament hosts. A tournament win would be the perfect way for Warner to retire and then focus on his other interests, such as horse racing. The big-hitting batsman currently owns shares in Raw Impulse and used to race The Bull.

On this day 2001, Rock of Gibraltar won the Dewhurst @NewmarketRace for Sir Alex Ferguson........ pic.twitter.com/dUUmPynIgy

The legendary former manager of Manchester United is perhaps the most famous sports star who has gone into racing. Not only was Sir Alex Ferguson’s part-owned Rock of Gibraltar named the 2002 European Horse of the Year, but it also caused quite the stir between Ferguson and its other joint-owner – the then major stake holder of Manchester United, John Magnier.

The two figureheads of the Red Devils had a major dispute over whether Ferguson should get a piece of ‘Rocky’s’ stud fees. The Scottish manager settled for £2.5 million to end the dispute, but the horse went on to win seven Group 1 races to be worth £200 million when he became a stud.

With all of the money that sports stars make, it shouldn’t come as a surprise that many of the most successful sportsmen have shares in horses.